It is more laborious than the cultivation of logs, but the mycelium grows through substrate faster and the mushrooms can often be harvested within a few weeks.
Growers gratefully make use of this, and cultivate on different substrates such as sawdust, wood chips or straw.
They do this in large sheds or containers, where humidity and temperature can be regulated perfectly.
Not everyone has access to a computer-controlled shed, so we are dependent on our room temperature and the seasons.

Substrate Breeding in the cold months

In species from the temperate regions the mycelium grows through the wood during the spring and summer months, and the fruiting bodies appear in autumn and winter.
The mycelium needs a cold and wet period to form fruit bodies.
When growing on substrate, we can mimic this cycle by letting the substrate grow in a heated room, and then bring it outside.

Species for the autumn and winter cultivation are:

Substrate Breeding in the warmer months

There are also species that don't need a cold shock, because they originate from warmer areas, or because they are cultivated varieties.
With these species, the growth of the mycelium through the substrate, and afterwards the forming of the fruit bodies, can also be done outdoors. Especially with the Oyster Mushrooms on straw this is an option, because of the rapid growth of the mycelium. 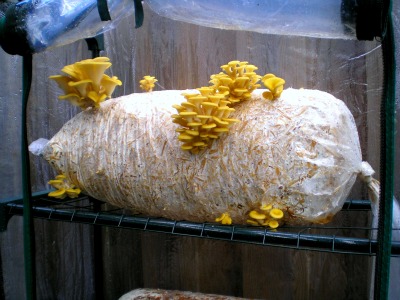 Species for the summer breeding are:

Growing mushrooms at home is not recommended, due to the huge production of spores. Some people are allergic to this. An exception applies to a sporeless strain from the tree oyster.
As for most species the mycelium grows best around 21 ° C, we can do that part in a room or heated basement.

This way, we can cultivate mushrooms on substrate outdoors, year round. In the summer we grow the warmth loving ones like Yellow, Pink and Summer Oyster Mushrooms, and during autumn and early spring the cold shock types, such as the Tree Oyster Mushroom, Shimeji and Enoki. The latter grows even in winter.

The cultivation of oyster mushroom on wheat straw

The oyster mushroom is a good candiate to start with, for a number of reasons.
It grows very well on wheat straw, which is very cheap and can be bought from the pet shop.
The mycelium of oyster mushrooms grows very rapidly. At a temperature of 20 to 25 ° C, the straw will be grown through in 3 weeks and the fruitsetting can begin.

The pasteurisation of the straw

The advantage of pasteurization is to kill other fungi and bacteria, and more food is released from the straw, which is beneficial for fruiting.

The straw can be pasteurized by heating it up to 70° C in a large container with water, after which you can drain it and let it cool to room temperature.

Now we mix the straw with the spawn. We can do this in a container or a bag, as long as there are holes in it, for proper draining.

The advantage of a transparent plastic bag is, that you can follow the process better, but a dark bin bag works just fine.
Even better are the so-called tube or column bags, which provide a more natural effect.
The advantage of bags over containers: you can hang them up high, so snails and the like can't get to it.

First we put a layer of straw of about 5 or 10 cm at the bottom, then a handful of spawn. Then a layer of straw again, and so on. We alternate straw and mycelium until the bag is full. Don't use too small bags, as the straw will dry out sooner. After we've closed the bag, we make make holes all around the bag. These are to enable gasses to be exchanged, and later the mushrooms will grow through these holes..

The right ratio of spawn and straw is debatable; the larger the amount of spawn, the sooner the straw will be grown through with the mycelium, and also the rye itself affects the later fruiting, as it is extra food for the fungi.
One liter of rye spawn is certainly enough for 2.5 pounds of straw (dry weight), which is about an ordinary binbag (30 litre) full after pasteurization.

We put the whole thing in the dark at room temperature and after 3 weeks, the straw is grown through.

The bags can now be put outside; hang them in a sheltered spot. Unlike the the regular button mushrooms, wood-eating mushrooms do need light to grow.

For species like the Tree Oyster Mushroom, the budding is stimulated by decreasing temperature and rising humidity, so this species is ideal for fall and early spring, rainy weather is the best course.

For the Yellow and Pink Oyster Mushroom a drop in temperature is not required for fruiting, but a moist environment is. So in dry weather we have to give nature a helping hand, for example by creating a sort of tent over it with transparent plastic, and then occasionally spray some water on the straw. 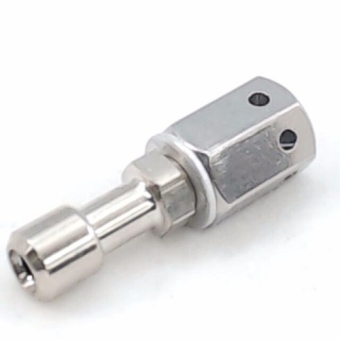